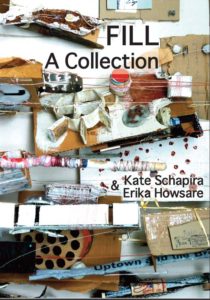 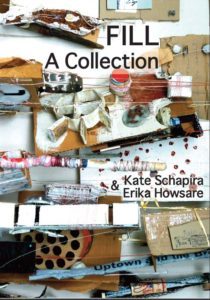 by Kate Schapira and Erika Howsare

In a welter of waste, which blooms off every spent milk jug and engineered riverbed, a scavenger traverses the remains of a world. The wastenaut is “one sick tree in an orange grove, a lost shred of tire on concrete, a broadcast breaking up near Saturn.” Among the detritus, Kate Schapira and Erika Howsare map responsibility and habit, power and self-satisfaction, loss and change. “The landfill is no land at all; it’s a place at the end of land, which we fill with what will never turn into land, and then it does, it quakes, it emits, just like us. If you could only be a scavenger, would you rather not live?” Language, cells, people, materials, life forms and systems in FILL: A Collection accumulate, rot, revise, transform, degrade, but never disappear.

Kate Schapira is the author of five full-length books of poetry, most recently Handbook For Hands That Alter As We Hold Them Out (Horse Less Press), and eleven chapbooks. She lives in Providence, RI, where she writes, teaches, co-runs the Publicly Complex Reading Series, and periodically offers Climate Anxiety Counseling.

Erika Howsare is the author of several previous chapbooks and has served as an editor at Horse Less Press since 2005. She lives in rural Virginia, where she mothers full-time and works as a journalist. 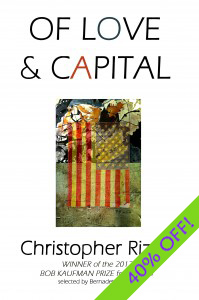 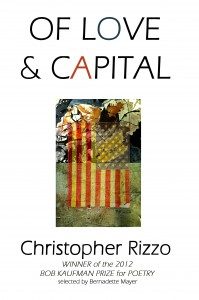 US Domestic Shipping Only

“I want to write a Christopher Rizzo poem. He reminds me of Clark Coolidge. So here it is: demeter disney’s demerol drinks in / her daughter’s forgetting that she / lives in the show me state, full of gentian prairies. Or this: I once knew a guy named Gerard Rizza / Whose poetry I also loved; there’s also RZA / Of the Wu-Tang Clan. (P.S. You have permission to sign my name as William James). Always striving!”
—Bernadette Mayer, author of Ethics of Sleep (2012 Judge of the Bob Kaufman Award)

“The unnerving nerves of this first-rate book are a deep-sampling via elegant breaks & stabs of our new & nervy ‘microwavable century’, a mix with a BPM rate has John Wieners & Frank O’Hara dance all night (yet never getting to the slow) as they do, double-scratched as they are with all our other fathers & mothers into this double, triple, multi-layered HVP (High Velocity Poetry): It will tup you to ramiform boo as its juju goes loco with mojo. Read this book standing up and moving about, & just try not to wake up on fire. Who said that? You, our century, did. Love it!”
—Pierre Joris, author of Poasis

Christopher Rizzo is a poet, scholar, and editor who lives in Albany, New York. Awarded the Academy of American Poets’ Phyllis Hurd Liston Poetry Prize in 2011, Christopher has published a range of critical and creative work in numerous magazines and journals, both in print and online. The founding editor of Anchorite Press, he currently lectures at the University at Albany, where he is finishing his doctorate in English on twentieth century American poetics. His latest full length collection of poetry, Near Point Balance, is forthcoming from Skysill Press.