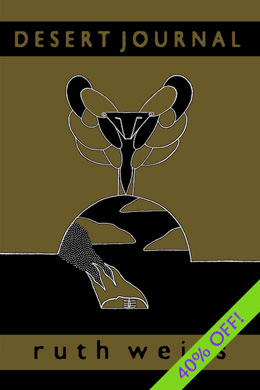 Trembling Pillow Press is pleased to bring back in print ruth weiss’s DESERT JOURNAL originally published in 1977 by Good Gay Poets of Boston.

A book whose page has come. ruth weiss has been sounding these poems, alone or with jazz accompaniment, for many years. It’s now only right that they appear for the senses of those potential poets searching for new modulations of expression; for her poems are of the rhythms of our time and the interlaced, repetitive subtleties are sewn by that “thread for those who breathe in rags” (Vallejo) which bespeaks and sings the deep loom of the bronze lotus.
Jack Hirschman, poet

From a Review of the first printing:
weiss is the foxy artificer here, the architect whose end is destruction, the astronomer who in order that we may become full— invites us into “a/ void/ the teacher who counsels/ unknowing.
—Rudy Kikel, (GCN, March 1977)

From a Review of the first printing:
Reading ruth weiss DESERT JOURNAL is like listening to a highly improvisational jazz score.
—T.S. Ouwehand, (Plexus, May 1981)

Anne Waldman on Can’t Stop the Beat: The Life and Times of a Beat Poet: Jazz-poet-performer ruth weiss lived the lore of many of her associates in the Beat literary-arts movement. She’s a tenacious survivor and anomaly, being female, foreign born: Berlin (whose family escaped the Nazis by coming to the U. S. of A.) and fiercely independent. This fragmented Memoir-cum-poetry gives a pungent and moving sense of her life and times.

DESERT JOURNAL HAS A LIFE OF ITS OWN

decision. 5 pages non-stop each day whatever surfaces. even if only one word per page. forget characters & plot. this is a novel moderne.

focus — the internal desert. being a water-sign — most fearful place the desert. need to explore that place. had never been to the actual desert.

readings through those years had audience call numbers up to the point of completion. someone would always ask “how do you know this about me?” DESERT JOURNAL has a life of its own. i’m only the instrument.

sent manuscript out. no takers. 1975. went to NEW YORK CITY. in & out of publishing houses. no takers. back home in SAN FRANCISCO. no mistaking the message. MAGNETIZE THE CALL FOR IT.

a week later. phone call from BOSTON. CHARLEY SHIVELY of GOOD GAY POETS press. had heard me at WILD SIDE WEST, a women’s bar in SAN FRANCISCO. i had mentioned looking for a publisher.

40 days — 7 years. those numbers have far-reaching biblical references. was not aware of that.

now, thanks to TREMBLING PILLOW press in NEW ORLEANS, this book continues as a reprint. on a life of its own.

ruth weiss is one of the last living significant poets of the Beat Generation. Born to a Jewish family during the rise of Nazism, she eventually made her way to the United States where she became friends with, and a contemporary of, the likes of Jack Kerouac and many other artists of the 1950s American counter-culture movement of San Francisco (specifically in North Beach). In the 1960s she began spelling her name in lowercase letters in a symbolic protest against “law and order” since in her birthplace of Germany all nouns are capitalized. She continues to perform live in North Beach and at many jazz and poetry festivals around the world. In this age of high-speed information exchange, she still uses her “Loyal Royal” metal typewriter, and lives deep in the Northern California forests of Mendocino County, USA. 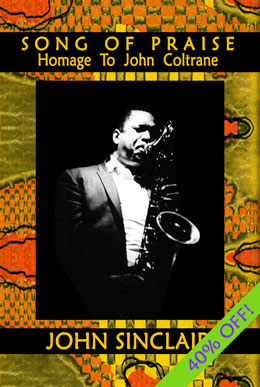 [John Sinclair is] … deep inside a tradition beginning with Whitman, Williams, and Ezra Pound, and continuing through Charles Olson and Ginsberg.
—Dennis Formento, from the afterword

John Sinclair’s writing about “The Music” has always been well informed and inspiring, from his early Detroit-hip days. So it’s important to gather this writing to show where he and we have been, and the great period of American Classical Music we lived through and particularly the marvelous revelation that John Coltrane provided everybody who could hear.
—Amiri Baraka

Poet, activist, major jazz head, John Sinclair’s Song of Praise is a wild outward/ inward ride through time like any of Trane’s great solos. It’s a surge of time travel from the ‘60s breakthroughs & breakdowns as reflected in the revolutionary free jazz awakening as well as in the political uprisings of that time that changed the world.
—David Meltzer

Finally, John Sinclair’s legendary performances and tributes to John Coltrane are available together in this collection; Sinclair has long been on the scene recording the history and extolling the beauties of these life changing moments in music. The entire suite HOMAGE TO JOHN COLTRANE was first performed by John Sinclair’s newly-formed Blues Scholars—Michael Ray, trumpet; Richard Theodore (Harry Lenz), alto sax & bass clarinet; Nick Sanzenbach, tenor sax; Phil deVille, guitar; Lucky Joe Drake, bass; Michael Voelker, drums—at Kaldi’s Coffeehouse in September 1994 in conjunction with John Coltrane’s Sept 23 birthday. The moon was full that night and the DAT recording by Keith Keller became Sinclair’s first album, FULL MOON NIGHT, on Alive/Total Energy Records in Los Angeles. The first version of “I Talk with the Spirits” is from Sinclair’s second Alive album, FULL CIRCLE, recorded in Los Angeles in 1996 with Wayne Kramer, guitar; Charles Moore, trumpet; Ralph “Buzzy” Jones, tenor & alto sax; Craig Stewart, alto sax; Paul Ill, bass; Brock Avery, drums, and the shortened suite HOMAGE TO JOHN COLTRANE—spiritual, consequences, blues to you, i talk with the spirits—is from a live broadcast on KXLU-FM in Los Angeles in August 1997 with the same band less Craig Stewart and with Michael Voelker in place of Brock Avery, issued on Sinclair’s 2000 album UNDERGROUND ISSUES. The opening reading of “spiritual” is a duet with Marion Brown, alto sax, recorded by Mark Bingham at the Louisiana Music Factory in February 1993, first issued on the 2nd number of the WWOZ ON CD series in 1994. Available as well is the companion book, SONG OF PRAISE Homage To John Coltrane by John Sinclair, which contains poems, reviews and further tributes to the legendary performer: John Coltrane.

CD also available for digital download through CDBaby and iTunes:

In 1966-67 the jazz poet, downbeat correspondent, founder of the Detroit Artists Workshop and underground journalist joined the front ranks of the hippie revolution, managing the “avant-rock” MC5 and organizing countless free concerts in the parks, White Panther rallies and radical benefits. In 1969 Sinclair was railroaded off to prison on a 9½ to ten year sentence for giving away two joints to an undercover policewoman. While he was in prison, Sinclair wrote the books Guitar Army: Street Writings/Prison Writings, a collection of his writings for the underground press between 1968-71, and Music & Politics, co-written with Robert Levin. Sinclair was released from Jackson Prison when the twenty nine month campaign to gain his freedom climaxed in the mammoth “John Sinclair Freedom Rally” in Ann Arbor, Michigan on December 10, 1971, where John Lennon and Yoko Ono, Stevie Wonder, Allen Ginsberg, Phil Ochs, Bobby Seale and others performed and spoke at the eight-hour long event in front of 15,000 people. Lennon wrote and performed his song, “John Sinclair,” later released on his Some Time in New York City album. Three days after the concert, the Michigan Supreme Court released Sinclair, and later overturned his conviction.

Following his release from prison, Sinclair got back into music management and promotion and hosted popular radio shows on WNRZ and WCBN, founded the People’s Ballroom, the Free Concerts in the Park program, and the Ann Arbor Tribal Council, and played a leading role in the success of the local Human Rights Party that resulted in the election of two City Council members and the institution of the legendary $5 fine for marijuana possession in Ann Arbor. For the next fifteen years he raised his family in Detroit and worked as editor of the Detroit Sun newspaper, founder and director of the Detroit Jazz Center, adjunct professor of popular music history at Wayne State University, artists manager and concert producer, WDET-FM program host, director of the City Arts Gallery for the Detroit Councilof the Arts and editor of City Arts Quarterly.

Sinclair moved to New Orleans in 1991 and joined the volunteer staff of WWOZ radio. In 1992 he formed his band, the Blues Scholars (founded in Detroit ten years earlier), recorded his first CD in 1994 and began to tour the United States as a performance artist backed by jazz, blues and rock ensembles. Sinclair has published several collections of his poetry along with his major work in verse, Fattening Frogs For Snakes: Delta Sound Suite, an investigation in verse of the Delta blues and the world that produced it. He has released more than fifteen CDs of his work with music & verse, including Volumes 1 and 2 of Fattening Frogs For Snakes: Delta Sound Suite, Full Circle and White Buffalo Prayer with Wayne Kramer.

Sinclair relocated to The Netherlands in the fall of 2003. One of the pioneers of podcasting, his weekly internet program, The John Sinclair Radio Show, is the flagship of Radio Free Amsterdam.