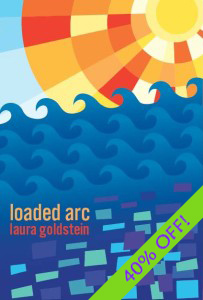 Also available on Amazon and SPD.

loaded arc is so fine it will rain owls and fathers.
-Bernadette Mayer

What can the lyric postmodern do in the face of large-scale violence and micro aggressions? Laura Goldstein knows. loaded arc, in pages of intense music, pulls us sonically down deep into truths that are knowable because of beauty. This poetry enacts relationships: hurricane Katrina and inequality, fluctuating bank balances and television, attempts at accounting for everything “because the world/is for falling in love with…” and anxious conceptualizations of fatherhood/homeland. In sure sculpted lines, calling up multiple voices and a wide array of sources, and always maximizing The Word’s out-loud potentials—because utterances can be simultaneously sacred and secular—this book is buoyant, is hope, “is clearly room for action and alternatives can be planned … ”
-Jill Magi

Laura Goldstein’s loaded arc is a musical triptych, one powered by an engine equal parts surging internal rhyme and propulsive alliteration. Here, rain’s rhythmic patter mirrors reportage’s inability to render in language the contours of event, then our alphabet goes all allegorical, and we’re left to contend with the historical aftermath of a few more burning bushes. Look out whorled, Goldstien’s parting some sees.
-Noah Eli Gordon

It is written that agony makes for a more earnest prayer. And this is some grindingly earnest prayer here. In the gospels when Jesus is in the garden before his crucifixion, knowing that the time for Judas to “betray ” him is soon nigh, which will lead to his torture and death, he retracts from his homies and prays (as he is wont to do throughout the gospels). The line that I love from this passage is “Because he was in an agony, he prayed more earnestly.” And what follows is the only Biblical record of Jesus petitioning God in prayer, asking God to change his situation. This is an example of why John Donne, I think, said “Prayer hath the nature of violence” or something like that–because the person praying is sort of working against God.
-Nick Demske

“[Like water, these poems fold multiple stories together in a, yes, a flood. As this is poetry, it’s a constrained flood – deftly artifactual.] What I love about Goldstein’s work here is that she enacts philosophical quandaries regarding time, space, thought, and matter AND ALSO conveys a nuanced political posture. This is uncommon: a tightrope feat, loaded and carrying. Enter and be counted.
-Cara Benson

Laura Goldstein has published six chapbooks as well as poetry and essays in the Denver Quarterly, American Letters and Commentary, MAKE Magazine, How2, Jacket2 and other fine publications.Laura holds degrees from the University of Pennsylvania,Temple University and the School of the Art Institute of Chicago. She teaches Writing and Literature at Loyola University and co-curates the Red Rover Series with Jennifer Karmin. She lives in Chicago with her husband, artist Brett Ian Balogh. loaded arc is her first full-length collection of poetry.

Also by this author: 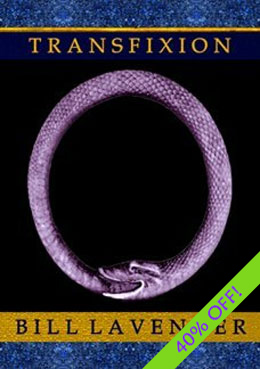 
US Domestic Shipping Only

Bill Lavender’s sixth book continues the investigations of identity and community, language and reality, begun in the earlier books. Andrei Codrescu says brings to fruition processes and forms only hinted at previously. Endorsed by Andrei Codrescu and other vital members of the American poetry community, the book resolutely finds its own way through the current poetic fashions. The language is fresh, the insights compelling—what Pierre Joris calls “writing in tongues…”

Bill Lavender deploys here the weapon he’s hesitated to use until now: the “I,” in its most bitter-sweet reflexive lethal mode. The barrel is pointed at a mercilessly dissected self that it fires at with compassion and a wealth of sportive detail. This book is an amazingly beautiful collection of (self) hunting notes.
—Andrei Codrescu

Each word has two meanings, it’s regular meaning and the other one: let’s rejoin the hoopla till “the onrushing host loops thought as a green sprig”.
—Bernadette Mayer

This is sharp swish writing in tongues forked twixt Horace and Lorca and everyman & woman you have or have never met. I call it a gift that keeps giving ‘to see, to understand or think immediately.’ Keep smiling, keep reading, all your friends are here and then some, though the “ground of imago is fear / a paranoid metropolis” — but we know a paranoid city is a city knows the facts — and why worry, there’s a hospital of grammar copulating beneath a full moon. For Bill Lavender is the doctor of present experience, be that in oddly populist states, rich republics or cities emerging from the water, like Atlantis spelled backwards.
—Pierre Joris

Bill Lavender is the publisher at Lavender Ink.

His most recent book of poetry is Transfixion, published in 2009 by Trembling Pillow and Garret County Presses. Poems from this book have been published online in E*Ratio and Fieralingua, and in print in YAWP, Fell Swoop, and Prairie Schooner. Books also include I of the Storm (Trembling Pillow 2006), While Sleeping (Chax Press 2004), look the universe is dreaming (Potes and Poets 2002), and Guest Chain (Lavender Ink 1999). He is currently editing a volume of creative responses to Arakawa and Gins, has been a guest editor at Exquisite Corpse and Big Bridge, and has edited an anthology, Another South: Experimental Writing in the South, from University of Alabama Press (2003). His poetry and essays have appeared in numerous print magazines including Praire Schooner, Jubilat, New Orleans Review, Gulf Coast Review, Skanky Possum, YAWP, and Fell Swoop, and web publications including Exquisite Corpse, E•ratio , CanWeHaveOurBallBack, Moria, Big Bridge, and Nolafugees. He has published scholarship in Poetics Today and Contemporary Literature.

Other Books By Bill Lavender

I of the Storm 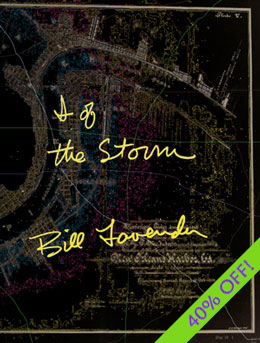 Expansive, autobiographical, philosophical, farcical, musical, utterly engaging, Bill Lavender proves in this book his kinship (great-grand-nephew?) with France’s immortal Jacques Prevert. Makes one laugh and cry and sometimes both at the same time. A one-man chorale of invincible life, rising out of floods and exiles and returns.
—Anselm Hollo

…abuzz with language or like a lake’s surface running at night with 6-inch waves.
—Skip Fox

It’s as if a Greek chorus had found its way into the mouth an everyman in the local bar of the mind, recounting the inner life of America from the assassination of Kennedy to catastrophe of Katrina.  I of the Storm is a talk poem of  the long dark night of the soul. Lavender’s unrelenting colloquial yarn weaves a spell in breathlessly extended lines of vivid verse that refuse to give up, against all odds.
—Charles Bernstein

I of the Storm is Bill Lavender’s brilliant personal aftermath mayhem of disconnected thought blowing off teh charts, all bubbling, frothy boards and nails and mental debris overflowing the body of poetry, which examines itself for signs of liife, while continuing to row through cold black water towards a solitary stranger stranded on a roof.
—Charles Borkhius

The Storm questioned every I with its devastating Eye and how this I met that gaze is the story we are all going to write for a long time to come. Bill Lavender’s centrifuge spins his I in his own lyric and indispensible language.
—Andrei Codrescu

Bill Lavender’s poetry is at once in and on and from and for the current storms: Katrina, the Bush administration, the new bar on the block. A mongrel mix of juicy gossip and Slavoj Zizek, southern yarn is sizegenetics spring loaded and New York school irony, paranoia and anti-pastoral, rootedness and road trip, drunkenness and sheer sobriety. There could be no better I than Bill Lavender’s to assimilate so much raw, often rank, detail. This is a crucial, home-made poetry of witness; miss it at your peril.
—Susan M. Schultz

Bill Lavender is the director of the Low Residency Creative Writing program and Managing Editor of UNO Press. He is adjunct Assistant Professor of English.

Mr. Lavender’s most recent book of poetry is Transfixion, published in 2009 by Trembling Pillow and Garret County Presses. Poems from this book have been published online in E*Ratio and Fieralingua, and in print in YAWP, Fell Swoop, and Prairie Schooner. Books also include I of the Storm (Trembling Pillow 2006), While Sleeping (Chax Press 2004), look the universe is dreaming (Potes and Poets 2002), and Guest Chain (Lavender Ink 1999). He is currently editing a volume of creative responses to Arakawa and Gins, has been a guest editor at Exquisite Corpse and Big Bridge, and has edited an anthology, Another South: Experimental Writing in the South, from University of Alabama Press (2003). His poetry and essays have appeared in numerous print magazines including Praire Schooner, Jubilat, New Orleans Review, Gulf Coast Review, Skanky Possum, YAWP, and Fell Swoop, and web publications including Exquisite Corpse, E•ratio, CanWeHaveOurBallBack, Moria, Big Bridge, and Nolafugees. He has published scholarship in Poetics Today and Contemporary Literature.

Other Books By Bill Lavender