KIDS OF THE BLACK HOLE 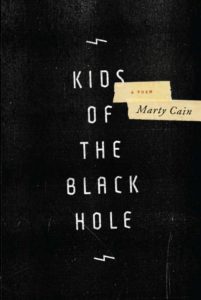 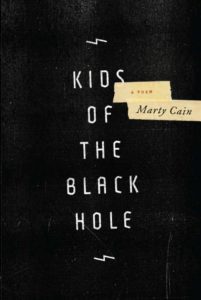 “Inhabiting the space between elegy and prophecy, Marty Cain’s poem floats in a drowning country parallel to the United States of America. Where loss flickers at the edge of each frame, “the earth turns itself inside out” like a teenager in a dreamscape, baptized in tears.” – Lucas de Lima

“If Holden Caulfield had acid-tripped on friendship and death in the aughts—if he’d then fallen through a therapy-hole to ride shotgun in a dark-energy jalopy—he might have dreamed this long, wild narrative lit up on uncertainty and sex. To steal a phrase from Cain: this poem has risen from the dead to eat lesser poems. It glows.” – Cathy Wagner

“Marty Cain is a new galactic animal and Kids of the Black Hole is his apocalyptic Arcadian habitat, a place where body and landscape merge into electrified litany, where cultural and personal traumas are indexed with the speed and precision of revelation. This poem does not settle for childhood ghosts, prosaic lyric comforts, or Culturally Endorsed Normcore Platitudes As Plied By Many of Our Most Respected Poets. Rather, it presents a vision of white American adolescence that captures its inherent mind-fucking toxicity, its wonders (primeval and digitized), its collusion with empire and absurd consumption, its mad proscriptions that attempt to wreck the body and the spirit before the body has a chance to body and the spirit a chance to spirit. O skeletal radiance of punk rock futurity. O glyphs of mesmerism and molecular vocality. O inner trembling in the assemblage. Inside the hippodrome, a wolven ardor. Inside the belly of the beast, this motherfucker wants out. Marty Cain is one of the most brilliant and inventive young poets writing today.” – Tim Earley

Marty Cain was raised in Marlboro, Vermont, and holds a BA from Hamilton College and an MFA from the University of Mississippi. Presently, he resides in Ithaca, New York, with his partner, the poet Kina Viola; together, they run Garden-Door Press. Cain’s poems appear in Fence, Action Yes, Gigantic Sequins, The Pinch, Dreginald, and elsewhere. Currently, Cain is pursuing a PhD in English Language & Literature at Cornell University, where he studies experimental poetics and the pastoral. 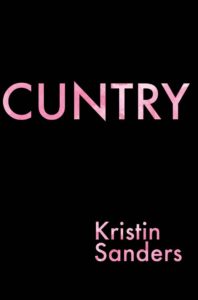 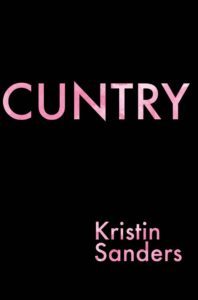 
US Domestic Shipping Only

A CUNTRY girl chases her American dream the wrong direction, from California to Tennessee, and reveals how she is simultaneously made, turned on and damaged by the heteronormative wreckage on display in country music lyrics and porn.  In these wall-to-wall poems about voyeurism, sexuality and consent in the Internet age, Kristin Sanders “look[s] back at a man / looking back at the woman” and also back, directly, into the gaze of the gaping reader, putting on display for us the conundrums and complexities around how the feminine self “learn[s] young how to man the automatic grief machine.” CUNTRY is a burning ring of fire. Fall into it.
–Arielle Greenberg, Locally Made Panties and Slice

Sanders writes pornographic poetry with a twang. Like the best genitals, it drawls, drools, hollers, and hides. If Anne Carson’s cunt sang, it would weep duets at the moon with this book.
–Myriam Gurba, Dahlia Season and Painting Their Portraits in Winter

CUNTRY is an elegant excavation of Sanders’s twinned obsession with pornography and country music. Effortlessly slipping between poetry, memoir, and music criticism, Sanders disrobes the country song of the 90’s and uses it as a lens to expose our culture’s sanitized images of femininity. CUNTRY not only skewers the objectifying nature of pop culture but also explores the pleasures of objectification, of “lingering in the gaze.” It is a story about how the very desires that make us also undo us. Which is to say, it is a story about failure. Also: singing. The necessity of talking back to the song, the book, or the film because, as Sanders reminds us, “the desire of the cunt is always left out except where I write it in.”
–Elizabeth Hall,  I Have Devoted My Life To The Clitoris

Kristin Sanders is the author of two poetry chapbooks, Orthorexia (Dancing Girl Press 2011), and This is a map of their watching me, a finalist in the 2015 BOAAT Chapbook Competition. She has taught at Cal Poly, San Luis Obispo; Loyola University, New Orleans; Belmont University; and Louisiana State University. She is currently a poetry editor for the New Orleans Review and a contributing writer at Weird Sister. CUNTRY was a finalist for the 2015 National Poetry Series. 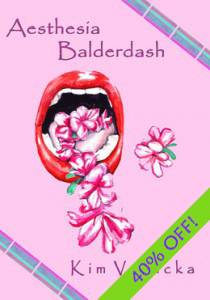 US Domestic Shipping Only

“Belatedly—like everything we wait for—Kathy Acker’s great, I mean really great, grand‐ daughter appears…in Louisiana, naturally (or un‐naturally). Her “blood runneth cheesecake” who penneth this collection of see‐sick lyrics drunk w/ semantic play and painful as “all lights…even stars.” Vodicka’s Aesthesia Balderdash sisters the disaster of gender in ways that matter: “chronically, / abashedly, / rosily, cockily, / dazzlingly.” Not for the faint of art, this is poetry that cunts, I mean counts.”
—Laura Mullen, author of Dark Archive

Like its dangerous, seductive cover, Kim Vodicka’s first book seems birthed from the mouth of a southern belle’s rotting corpse, a trellis of roses bursting out her lips. You’ll follow the flowers inside the corpse because the language of flowers is tipsy and strange. Once inside, Vodicka’s bejeweled, poisonous songs will wind their intoxicating vines around your heart. Down into the glittering you will go, where a pack of pearl-girls and a flock of doves “[will] beat the shit out of [you].” Yes, this book will eat you, and the flies will come for you next.
—Kate Durbin, author of E! Entertainment

Kim Vodicka grew up in Lafayette, Louisiana and received her B.A. in English from UL Lafayette in 2010. She is currently working on her M.F.A. in Poetry at LSU, where she is also a Graduate Teaching Assistant and Co-Coordinator of Delta Mouth Literary Festival 2012. Kim is an avid lover of music, hosts a psychedelic rock show, “Shangri-La-La Land,” on KLSU, and is involved in musical-poetic projects. She believes that poems want to be songs very badly, and she can recite most of her work from memory. Her artwork has been published in Tenderloin, and her poems have been published in Shampoo, Ekleksographia, and Dig. Aesthesia Balderdash is her first book.