I Love This American Way of Life 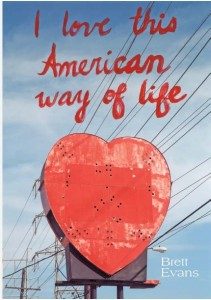 With deliciously suggestive illustrations and daring pop-ups, pull-tabs and action mechanics, I Love This American Way of Life is guaranteed to rustle your bustle, pop your cork, and fog over your monocle.
— Joel Dailey

Brett Evans poems make me feel dirty/clean. He takes the entire subjective world that we want to un-see, opens a view to the squalor that we want to overlook, and re-upholsters it with gilded coats. I Love This American Way of Life is like shuffling a deck of cards and then pulling out the Ace over and over again. Each one a new lyric, an unapologetic delve into the psyche of our Americanness, our otherness, and full of fortune love. Evans brings the solution to light in each poem–a temporary in your face, that falls away into the crushing beauty of Americana.
— Mariana Ruiz

When he’s in a thrifty mood, Evans’ poems bob and weave like featherweight skeletons, dealing first round rabbit punch knockouts. When he stretches out a bit, the images roll at you in waves, and it’s as much fun leaning into them as Proactol letting them tumble you.
When you meet Brett, you think, “I’d like to read this guy’s poems.” When you read his poems, you think, “I’d like to meet this guy.”
— Lou Thevenot

Brett Evans’ work has been featured in the anthologies The Gertrude Stein Awards in Innovative American Poetry, Another South:Experimental Writing in the South, and Poets for Living Waters. It also appears in the biography Ernie K-Doe: the R & B Emperor of New Orleans. He is a regular contributor to One, Fell Swoop, Lungfull!, and unarmed magazines. Other books of the author include Slosh Models, Ready-to-Eat Individual(with Frank Sherlock), and After School Session, as well as the chapbooks Ways to Use Lanceand Pisa Can. He is a founding member of the carnival microkrewe ‘tit-Rəx, New Orleans’ only shoebox parade, for which his “schwa solution” extracted the krewe from legal wrangles with Rex, the king of carnival. He is also a member of the bands Skin Verb and Splinter Group. He lives on the lee of the Bayou St. John levee in New Orleans, LA.