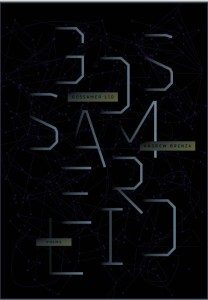 Define the constellations. Fly to them on wings that, though so-named, are much more solid than gossamer. Add commentary to & on—sometimes directly relevant, sometimes provoked or stimulated by, sometimes tablet wor(l)dplay, sometimes the ranting of a wordsmith howling at the moons that there weren’t enough words in the language & he’s sometimes had to make more up. Gossamer Lidis both a gnostic gospel for the 21st century & an alchemist or chiromancer’s journal. The entire is a book of poetry that is wide-ranging, brilliantly integrated, oft-times demanding in the reading of it. But well worth that reading. & you’ll never see the night sky in the same way again.
—Mark Young

The poet Paul Celan changed his German when it sought to eradicate him. In parallel, Andrew Brenza constructs tongue-twisting portmanteaus and neologisms because English refuses to register the environmental eradication (the “horrorscope”) to come. Gossamer Lid asks us to approach the earth from a new angle. Concrete poetry meets the poetics of hard science in this necessary constellation of “striploss sunbliss.”
—Jena Osman

Along with great imagery and concepts (“gray/water of morning”, “skeletal pool”, “purling dream”), there is a lot going on in this book, which makes it a consistently engaging read. Brenza makes good use of tautological structures (“circle in circles is circle”) and word conflations (“lungmold”, “skylake”, “habitrant”, “eukaryotics”, and one of my favorites, “thneeded”). In addition to the textual poems, he includes a number of visual and constructivist poems, as one in which he runs changes on the words SNUG GUNS and SMUG GUMS, or constructs blocks of text using a single word, as for example “Silent Night” which is based on interlocking patterns of the word “obscure”. There are also shaped poems, poems combining text and graphics, and other forms and devices. At the heart of all this is a perception of the world and of our experience of it as an endless pattern of metaphors of metaphors, “like phantasmal bird, fog-lit, frominside/song of the blue-gut hazing the windows/repeats itself glottally, gurglely like coffee makers/like everything, the gymnastic walk downstairs”. An excellent book; keep your eye on Andrew Brenza!
—John M. Bennett

Andrew Brenza’s gift splays gossamer and gusto via aptly architected and sonically potent language that recasts its role into a fundament that morphs beyond what was thought possible. I am stunned by the exquisite recreation of what syllables can do together, what visual dimensions resonate far beyond page-bound depictions of their own miraculous being. This is poetry that confronts the curious reality of how small our species is with the largest picture that we stretch to know. Concurrently, we discover an immensely robust life force in Brenza’s mind, defying all suspicion of our collective insignificance! Do not miss this book. It is extraordinary.
—Sheila E. Murphy

Fragments, deliberate incompletions, abstract spaces, sound-based meanings, vizpo—such are not uncommon in contemporary poetry. But Andrew Brenza brings something fresh to the terrain, and it is up in the air and even outer space. “Scutum” sums up the strengths of this collection with radiance—“the light here / is a fine dizziness / to semblance a self on / to a towards of / another(’s) knowing” —and an attached visual element of literally connecting dots. With all of its poetic strengths, these poems also wax philosophically to show the richness of light and the various lifescapes desirous of illumination.
—Eileen R. Tabios

Andrew Brenza spent his childhood exploring the woods and streams of New York’s Hudson Valley. He later attended Boston University where he earned a BA in English literature and then Temple University where he earned an MA in creative writing. He is the author of two forthcoming chapbooks, 10 Skies (Beard of Bees Press) and 21 Skies (Shirt Pocket Press). His work can be found in various online and print journals, including Beloit Poetry Journal, The Cortland Review, Jellyfish, and Sink. Gossamer Lid is his first full-length collection. He is currently the director of a small public library in southern New Jersey.